The Pentagon has announced it will reduce troops in Afghanistan and Iraq to the lowest levels since the earliest days of America’s wars in the countries, in a withdrawal that would conclude just before Joe Biden’s inauguration as US president.

The drawdown, announced by Donald Trump’s newly-installed acting defence secretary, was ordered by the outgoing president despite opposition from some defence officials, who argued that instability in Afghanistan made a retreat unwise.

The Trump administration had already reduced US troop levels in Afghanistan from 14,000 last year to 4,500, under to Mr Trump’s promise to conclude the “endless wars” of his predecessors. The latest cutback would take force levels down to 2,500 in both Afghanistan and Iraq, where there are currently about 3,000 US troops.

Although Mr Trump has long advocated troop withdrawals in the region, the manner and timing of the order has caused consternation among Washington foreign policy figures.

Two people briefed on the discussions told the Financial Times that the White House could order the withdrawal of troops from Somalia as well. A defence official said an announcement was possible by the end of the week.

The drawdown in Iraq and Afghanistan is due to be completed by January 15, just five days ahead of Mr Biden’s inauguration. It was announced by Chris Miller, acting defence secretary, who replaced Mark Esper last week in a Pentagon shake-up that installed several Trump loyalists in influential senior positions.

Mr Miller, a veteran of the wars in Afghanistan and Iraq, welcomed the decision and paid tribute to Mr Trump’s “bold leadership”, saying the US wanted to finish “this generational war”.

Robert O’Brien, Mr Trump’s national security adviser, said the president hoped that all remaining troops would be home by May, when Mr Biden will be in office.

The US sent troops into Afghanistan in 2003 in the aftermath of the September 11 2001 attacks. The number of troops surpassed 100,000 after former president Barack Obama ordered a “surge”, which Mr Biden — then US vice-president — opposed.

Mr Biden has also promised to put a stop to what he has called the “endless” US wars, although he is expected to pursue a slower rate of reduction when he takes office in January.

Mr Miller said he had spoken to Congressional leaders as well as US allies and partners abroad about the decision earlier on Monday. But some senior Republicans and allies opposed the move, arguing conditions did not yet justify them.

Mac Thornberry, the top Republican on the House of Representatives armed services committee, called the order a “mistake”, arguing that reductions would undercut US peace negotiations with the Taliban.

Adam Smith, the Democratic chairman of the same House committee, supported Mr Trump’s decision, arguing that it was up to Afghans to achieve a sustainable peace. But he said the drawdown must be executed “responsibly and carefully”.

Iraqi authorities have struggled to curb attacks on the Green Zone. The hail of rockets broke a roughly month-long pause in hostilities from Shia militia groups, which have deep ties to Iran and want American troops out of Iraq. 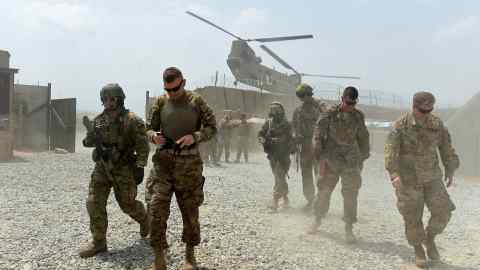 The Taliban had agreed to stop attacking US troops and harbouring al-Qaeda as part of a deal in February to secure the US withdrawal from Afghanistan. The extremist group also agreed an end to the war with its counterparts in the Kabul government. Those talks have just begun, months behind schedule.

“[The] Taliban has done nothing — met no condition — that would justify this cut,” Mr Thornberry said in a statement.

One western diplomat in Washington said the timetable appeared to be dictated by politics rather than the reality on the ground.

“Any reductions that are not seen to be driven by conditions on the ground will chip away at allies’ confidence,” said the diplomat.

Jens Stoltenberg, secretary-general of Nato — which still has non-American coalition forces in Afghanistan and a training mission in Iraq — warned against retreating too quickly from Afghanistan in particular.

“We have been in Afghanistan for almost 20 years, and no Nato ally wants to stay any longer than necessary,” he said in a statement. “But at the same time, the price for leaving too soon or in an uncoordinated way could be very high.”

Later on Tuesday, Mr Trump appointed Scott O’Grady, a former fighter pilot who was shot down in Bosnia, as assistant secretary of defence focused on international security affairs.

US presidential election 2020: You tell us