Russian soldiers are no strangers to patrolling the front lines of frozen conflicts in the country’s neighbourhood. But the almost 2,000 troops deployed to the disputed Caucasus territory of Nagorno-Karabakh this month find themselves thrust into an unaccustomed role: that of unbiased peacekeepers.

Unlike Russia’s military presence in eastern Ukraine, the Georgian territories of South Ossetia and Abkhazia, and Moldova’s breakaway region of Transnistria, the troops will not be defending land held by pro-Moscow separatists.

Instead, as part of a ceasefire deal brokered by Moscow to end a six-week long war between Azerbaijan and Armenia, the soldiers must police a bitterly divided three-decades-old battlefield, enforcing vast Azerbaijani gains while protecting a besieged and battered Armenian enclave.

“Any peacekeeping mission deployed to what just recently was a war zone is fraught with risks . . . peacekeepers have to be as diplomatic as militarily capable,” said Maxim Suchkov, senior fellow at the Moscow State Institute of International Relations. “Russia’s larger role in the conflict means greater responsibility. The truce is hanging on a few threads, which are virtually all designed by Moscow.”

Mountainous Nagorno-Karabakh lies within Azerbaijan but is populated by ethnic Armenians, who took control of it and large areas of surrounding territory in a war in the early 1990s that killed about 20,000 people.

Lacklustre diplomatic efforts and sporadic violent clashes marked the next two and a half decades before Azerbaijan, backed by Turkey and boasting cutting-edge weapons, vowed to recapture the territory in late September, making huge territorial advances before the Moscow-brokered truce on November 10.

Russia has a mutual defence pact with Armenia but sought to maintain its close ties with both countries during the fighting. But the shift from mediating around the diplomatic negotiating table to manning observation points on the front line will probably strain Moscow’s role as regional hegemon as it seeks to balance the interests of both former Soviet states.

“Russian peacekeeping will now be a huge item on the bilateral agenda with both Armenia and Azerbaijan. Renewing or not renewing the mandate for it to continue will become a source of bargaining and leverage affecting much wider issues,” said Laurence Broers, Caucasus programme director at Conciliation Resources, a peace-building organisation. “Managing that influence in ways that avoid looking like a former imperial power will be challenging, however.”

Russia’s Ministry of Defence said on Monday that troops, backed by 90 armoured personnel carriers and hundreds of other vehicles, had fully deployed along the frontline and set up seven observation posts along the so-called Lachin corridor, a mountain pass that connects Nagorno-Karabakh to Armenia and remains open under the terms of the ceasefire.

In an early sign of the challenges of implementing the deal, a Sunday deadline for control of the Kalbajar region to be passed from Armenia to Azerbaijan was delayed by 10 days amid a civilian exodus and questions over the fate of the thousand-year-old Dadivank monastery located in the region.

Russian president Vladimir Putin used a call with his Azerbaijani counterpart Ilham Aliyev on Saturday to call for “ensuring the preservation and normal operation of those holy places” after the handover. But Russia’s defence ministry said two days later that it had deployed troops to the important Christian site “at the request of local [Armenian] residents”, and was considering a way to allow visits to the monastery, despite the plan for it to be handed over to Azerbaijan.

“There are some real logistical challenges to the evacuation of the civilian population — there is only one major road from Kalbajar to Armenia that can sustain large groups of people,” said Alp Coker, analyst at GPW, a political risk group.

“It is plausible that extra time was needed for these practical reasons, but it is also an opportunity to iron out some of the details of the agreement (which is quite vaguely worded) while continuing backdoor negotiations on other issues like Turkey’s involvement in the peace process,” he added.

Russia must also contend with the rising influence of Turkey, whose encouragement of Baku and support on the battlefield was critical in its military success, and made it a key player in a region that Moscow considers its backyard.

Azerbaijan has repeatedly called for Turkish soldiers to also act as peacekeepers, but the Kremlin says there is no role for them under the terms of the ceasefire.

Despite that, Turkey’s parliament on Tuesday granted permission for President Recep Tayyip Erdogan to dispatch troops to Azerbaijan to serve alongside Russian military officials in a ceasefire monitoring centre. The motion put forward by the government said the deployment “will be beneficial for the peace and welfare of the region’s people and is necessary from the point of our national interests”. 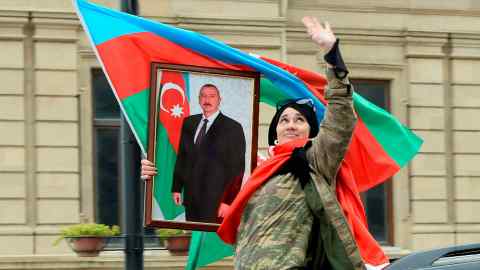 Mr Coker said: “Azerbaijan may not trust Russia and believe in their impartiality. President Aliyev has always pushed Azerbaijan’s relationship with Turkey and under the current agreement will probably want to have a strong Turkish military presence as well to counterbalance Russia.”

But in the absence of a plan for a permanent solution to a territorial dispute that goes back generations, Russia is likely to find itself in the unenviable position of being forced to find compromise solutions that please neither side.

The ceasefire “addresses security and transit issues in the absence of a wider political settlement capable of transforming Armenian-Azerbaijani relations,” said Mr Broers. “Without that Armenians and Azerbaijanis won’t be able to live in proximity to one another without seeing each other as threats.”

“Real security comes from political change, not peacekeepers,” he added. “That’s some way off.”