Rodney Weber is in the School of Earth and Atmospheric Sciences, Georgia Institute of Technology, Atlanta, Georgia 30032, USA.

The inhalation of outdoor airborne particles can damage health and lead to premature death1,2. Writing in Nature, Daellenbach et al.3 report that certain components of atmospheric aerosols — those that have the potential to increase the oxidization of molecules in cells — might be responsible for most of the acute adverse effects of these particles in Europe. They also find that the distribution of these potentially harmful aerosols differs from that of the overall mass of aerosols, with hotspots in regions where the human population density is high. The overall mass concentration of particles is currently used as the key metric for assessing the risk of aerosols and to guide air-quality regulations. If the oxidation potential of aerosols is a stronger indicator of adverse effects, then the new results show that the evidence used at present to inform policymaking is deficient. 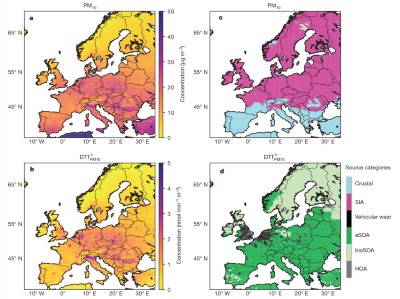 In many regions, the concentration of aerosol mass in the atmosphere has been monitored for decades. Correlations have thus been established1,2 between outdoor aerosol-mass levels and a diverse set of detrimental respiratory and cardiovascular diseases, along with a host of other conditions, such as diabetes and dementia.

However, the finding that a broad metric such as mass concentration is linked with these health effects is surprising, because aerosol particles are extremely complex. For example, they range continuously in diameter from tens of nanometres to tens of micrometres2,4. Particle size governs where particles are deposited in the respiratory system and whether they are transported to other organs, which in turn can influence the adverse effect produced2,4. Moreover, myriad chemical compounds can be found in aerosols, and the amount of each constituent varies continuously as particles grow and age4,5. Given the vast complexity of the particles we inhale, is there a better metric than mass concentration that could provide more-detailed insight into, and correlates more strongly with, the ill effects of aerosols on people?

One area of research has focused on a physiological mechanism known as oxidative stress to explain many of the varied adverse health outcomes of aerosols6,7. The idea is that particles carry oxidants into the lung and/or — probably a much worse effect — that specific components of the aerosol catalytically generate oxidants in cells when deposited in the lung or transported to other regions of the body. The oxidant load in cells is normally controlled, but if it becomes too high, the resulting damage to cellular components leads to oxidative stress and produces an overall inflammatory response.

Chemical assays have therefore been developed to analyse either the oxidants on particles or the aerosol components that generate oxidants in vivo, thereby allowing the oxidative potential (OP) — the capacity of particles to induce oxidative stress — to be measured. An ideal OP assay would comprehensively account for all the compounds that produce oxidative stress8 and their possible inter-actions with each other. Current assays arguably do not do this because they are sensitive to a few specific compounds.

To address this problem, Daellenbach et al. used three assays: one that quantifies the amount of oxidants on particles and two that assess the possible in vivo response. The authors loosely refer to all three as measures of aerosol OP, but agreement on more-precise terminology is needed in this field to clarify the source of oxidants (whether they were delivered by aerosols or formed in cells from aerosol components), and to aid consistency in the reporting of future results.

The authors collected about 90 samples of PM10 — particulate matter with a diameter of 10 micrometres or less — at each of 9 sites in Switzerland and Liechtenstein, and assessed the OP of the samples using the three assays. The authors then developed an air-quality model that predicted OP throughout Europe by extrapolating the data from the nine measurement sites, assuming that these locations were representative of all of Europe. They finally combined the model data with population-density data to calculate and compare human exposure to aerosol mass and OP. No comparisons were made to actual health data.

Daellenbach and co-workers found that OP was closely linked to human activities. The main sources of OP included organic aerosols produced indirectly from combustion, for example by residential wood burning, and metals from vehicle non-exhaust-pipe emissions (such as those produced by the use of brakes). This link to human activities resulted in the formation of OP hotspots at certain places with high population densities (Fig. 1).

By contrast, the overall mass distribution of PM10 was found to be more spatially uniform, because it was dominated by wind-blown mineral dust, organic aerosols derived indirectly from vegetation emissions, and sources of inorganic species, such as sulfate, nitrate and ammonium salts. An earlier study9 of aerosol-mass concentration also found that these salts contributed widely to aerosol mass and linked them to agricultural emissions (ammonium nitrate, for example, is a widely used fertilizer), thus suggesting that agricultural emissions should be a focus of efforts aimed at lowering premature mortality from aerosols over Europe. However, Daellenbach and colleagues show that these inorganic salts have low OP, and therefore are less concerning for human health. Clearly, any policy for protecting people from aerosols will be very different depending on which particle property — mass concentration or OP — is used to develop it.

It should be noted that evidence supporting the use of OP assays as indicators of health risks is mixed. The results of some toxicology tests of aerosol components do indeed correlate with OP determined by specific assays, and Daellenbach and colleagues show that this is the case for one of their assays. Several epidemiological studies have also shown that OP determined by some assays is more closely linked to specific adverse respiratory and cardio-vascular effects than is aerosol mass, but other studies do not10.

Moreover, it is difficult to compare studies that examine the effects of aerosol-mass concentration on human health with those that look at the effects of OP, because large data sets are needed for robust comparisons, and these are available only for mass-concentration studies. Instead, human exposure to OP is often predicted using computational models derived from a limited set of measurements, increasing the uncertainty of the results11,12. This is also an unavoidable limitation of Daellenbach and colleagues’ study.

Periodic reviews of the scientific bases for aerosol health effects by the World Health Organization1 and the US Environmental Protection Agency2 have so far found little evidence for replacing aerosol-mass concentration with metrics that focus more on the composition or source of the aerosols. But aerosol data founded on plausible biological mechanisms should be a better guide for future research addressing aerosol links to adverse health. Furthermore, as regulations and emissions driven by climate change alter the ambient aerosol composition in many regions, the usefulness of a mass-concentration metric might diminish. It is therefore prudent to explore other aerosol metrics, as Daellenbach et al. have done. Greater evaluation is now needed to help connect these metrics to human health data, to assess their utility.