Shares in Chinese technology group Joyy fell as much as 26 per cent on Wednesday after a short-seller labelled its livestreaming site a fraud, in a move that is likely to further hurt investor confidence in US-listed mainland internet groups.

Carson Block, founder of Muddy Waters, said YY Live was about “90 per cent fraudulent” and suggested Baidu was attempting to buy growth in the form of an “almost completely fake business”. He made the comments in a 71-page report that was based on a year-long investigation.

Like livestreams on video app TikTok, YY features stars who sing and interact with the platform’s millions of users. The audience send virtual gifts that turn into cash for the streamers.

But Muddy Waters said paying fans were “almost entirely bots operating from YY’s internal network”, its performers gifted themselves and those who were supposedly high-earners “in reality only take home a fraction of their reported totals”.

The allegations come after a turbulent year for US-listed Chinese tech companies. An internal investigation at Luckin Coffee, touted as the mainland’s rival to Starbucks, uncovered hundreds of millions of dollars of fabricated sales.

The Baidu-owned video platform iQiyi is also under investigation by the SEC. The company disclosed the probe this summer, which came after a short seller alleged iQiyi inflated its revenue and user numbers. The company has denied the allegations and said it was co-operating with the probe.

Muddy Waters said Baidu and YY Live “will be THE test of whether China Inc. is really just a few bad apples; or, whether the incessant cheating, lying, and indifference to US law permeate the highest echelons of China’s public companies”.

Muddy Waters said it held a short position in Nasdaq-listed Joyy, so it benefited financially when shares fell.

But YY told local media: “The Muddy Waters report is full of ignorance about the livestreaming industry and the livestreaming ecosystem. The report contains a large number of errors with unclear logic, confusing data, and sweeping generalizations.”

Nigel Stevenson, an analyst at Hong Kong’s GMT Research, said the Muddy Waters report was “credible” and he was not surprised YY was singled out. “It fits with concerns we have had previously in relation to YY’s financials,” he said.

“There is an ongoing theme of a constant drip of concerns being raised about some of these companies,” he added, referring to US-listed Chinese internet groups. Mr Stevenson described YY as one of the more high-profile targets.

The latest allegations come amid a push by the Trump administration to ban mainland companies from US stock exchanges if they do not comply with American accounting standards.

The Muddy Waters report will also add to the scrutiny of Baidu’s acquisition of YY Live, which was announced on Monday.

“We can’t rule out the deal will be delayed or suspended until the questions are cleared up,” said Shen Meng, director at Chanson & Co, a boutique investment bank in Beijing.

The decline of Baidu’s core advertising business has forced the company to develop its social and livestreaming offering, one of the fastest growing areas of ecommerce. But it faces stiff competition, notably from ByteDance’s Douyin app and Tencent-backed Kuaishou, another Beijing-based video service. 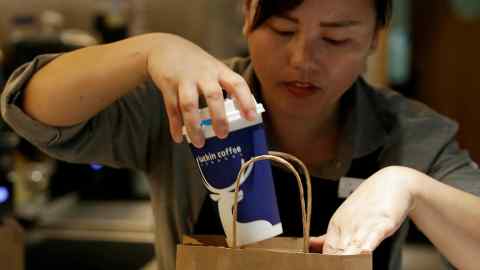 YY has acknowledged that growth is slowing. The company’s average monthly users fell by 4 per cent in the third quarter compared with a year earlier and paying customers declined to 4.1m from 4.3m. YY blamed the fall on Covid-19.

Jefferies analysts singled out “stringent regulations in short video and live streaming” in a research note. Daiwa analysts said they had “doubts over the operational synergies”.