‘I don’t think the PM knows’: Boris Johnson and the Brexit endgame

At 9pm on Wednesday November 11, a grey-faced Boris Johnson scurried past staffers in 10 Downing Street and into the office of David Frost, the man he has entrusted with trying to secure a trade deal with the EU. “The PM knew that David was unhappy — he thought he might resign,” says one of Mr Johnson’s aides.

The Vote Leave group was breaking up. The Brexit hardliners who campaigned to take Britain out of the EU in 2016 and now sustained the prime minister in office had fallen out of favour. Dominic Cummings, the iconoclastic chief adviser, was among those ousted. A few minutes later, a relieved Mr Johnson returned to tell staff that Lord Frost, his pro-Brexit chief Europe adviser since July 2019, would not be walking out in sympathy.

Lord Frost, ennobled by Mr Johnson in June in recognition of his loyalty and tenacious negotiating style, tells colleagues he never intended to quit at such a key moment in trade talks and that the tactics have not changed. But the chaotic events of recent days in Downing Street have compounded a sense of bewilderment in European capitals, as diplomats try to work out what it all means for trade talks that are entering the endgame.

Are Mr Johnson and Lord Frost now ready to make compromises in the next few days to secure a trade deal with the EU — without having Mr Cummings’ favourite refrain “fuck ’em” ringing in their ears? Or will they double down to prove to Eurosceptics they are willing to embrace the hardest of all hard Brexits in the name of national sovereignty?

One senior official says: “To tell you the truth, we don’t know — and frankly, I don’t think the PM knows either.”

Talks are bogged down on questions of access to British fishing grounds, rules to maintain fair competition between the two sides and an enforcement mechanism for the deal. All impact on Mr Johnson’s quest to regain unfettered national sovereignty. With the transition period ending on December 31, British ministers are confident Mr Johnson will opt for a deal. But EU negotiators have come away from talks over the past few days doubting whether that decision has really yet been taken.

“It’s obvious there should be an agreement,” says one senior EU diplomat, before noting quickly that Mr Johnson does not always do what is obvious.

Regardless of the eventual outcome, one thing is clear: the prime minister has already opted for what amounts to a hard Brexit. In his determination to break free of Brussels’ rules, he set out from the beginning to negotiate a standard free trade agreement, accepting that this would mean new frictions for trade in goods, and lost opportunities for providers of services.

Some Brexiters initially claimed the UK could remain in the EU single market, but they abandoned that idea when it became clear it would require the government to abide by Brussels rules. Theresa May split the difference in her July 2018 Chequers plan, an attempt to maintain access to the single market with minimal border friction under a “common rule book”; it was rejected by Eurosceptics as a capitulation and by EU leaders who saw it as “cherry picking”. When Mr Johnson became prime minister in July 2019 he opted for a much cleaner break.

Business is already facing a mass of red tape on January 1 by virtue of Mr Johnson’s decision to leave the single market and customs union; that will still happen regardless of whether there is a trade deal.

A deal would provide for tariff-free trade on goods that qualify as EU or UK made, helping cushion the blow for sensitive sectors including automotive and agriculture. It would also include other measures to help trade flow — recognition of truckers’ permits for example. Most trade experts agree it would be better than nothing.

Ivan Rogers, Britain’s former ambassador to the EU, has long argued that “the delta” between leaving with a thin goods-only deal and leaving without a deal was so modest that Mr Johnson might find it politically easier to make a clean break with the EU, blaming intransigent Europeans for the chaos that looms in any event on January 1. 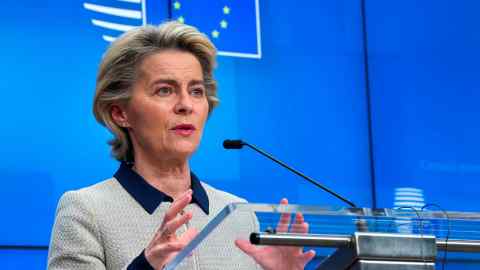 The most recent UK government estimates reckoned the UK would miss out on 4.9 per cent of future income over 15 years if it left the bloc with the kind of basic trade deal under discussion. Under a no-deal scenario, that hit would increase to 7.7 per cent over the same period, compared with staying in the EU. That difference is significant but perhaps not a clinching argument for Mr Johnson.

But other factors will weigh heavily on the prime minister. If he does not secure a deal — and Britain leaves on what he euphemistically calls “Australian” or World Trade Organization terms — it will not be the end of the story. Even Australia on the other side of the globe is negotiating a trade deal with Brussels; Britain at some point will want one too. Rather than turning a page on Brexit, the issue would dog his premiership.

Failure to secure a trade deal would create new tensions in Northern Ireland — which will remain covered by EU customs rules as part of the divorce deal Mr Johnson struck with the EU last year. Mr Johnson has threatened to renege on those commitments over fears about the impact of a trade border in the Irish Sea. But US president-elect Joe Biden twice warned Mr Johnson in a phone call this month not to let Brexit imperil the peace process in the region.

Gordon Brown, former prime minister, wondered this month if Mr Johnson really wanted to be “at war” with the EU and the US at the start of 2021, just when “Global Britain” takes over as head of the G7 and hosts the COP26 UN climate change conference. Trampling over international treaties and antagonising allies would be sharply at odds with the new Biden-led era.

Then there is the future unity of the UK. Successive opinion polls show that Scotland — which voted 62-38 to remain in the EU — now favours independence, with Brexit fuelling the grievance towards Mr Johnson and the government in Westminster. Michael Gove, Mr Johnson’s cabinet colleague, has been urging him to agree a deal if possible.

Finally there is the issue of competence. Mr Johnson has at times been overwhelmed during the Covid-19 crisis; failing to agree a trade deal, which Eurosceptics have claimed would be “the easiest in the world”, in the midst of a global pandemic would be a further blow to his chaotic premiership. The prime minister himself said in February that it was “very unlikely” that the talks with Brussels would not succeed.

“He needs a victory,” admits one Brexiter close to the prime minister.

With less than six weeks to go until Britain’s transition period ends, some business leaders and hauliers have given up waiting for Mr Johnson to make up his mind and are preparing for major disruption.

Richard Burnett, head of the Road Haulage Association, says hauliers are now “resigned” to the fact that there would be disruptions on January 1 and would just have to manage as best they can.

Marc Payne, managing director of Plymouth-based Armoric Freight International, says that in the event of a ‘no deal’, where the EU and UK failed to recognise each other’s trucking permits, it is unclear whether he would get sufficient permits to drive into the EU.

The imposition of customs and veterinary checks on goods crossing the Channel will soon become a fact of life, complete with the need for documentation, new arrangements for paying VAT, export authorisation numbers and, inevitably, truck queues.

As new barriers appear, old freedoms will be lost. UK architects, doctors and other experts from regulated professions will no longer have automatic recognition of their qualifications across Europe — instead they will have to seek permission to work from authorities in individual EU countries.

UK nationals will no longer have the same freedom of movement rights within the EU — relying instead on a visa-waiver programme that will allow them to spend up to 90 days in any 180-day period in the union’s border-free Schengen zone. Household animals will also lose the pet passport — their equivalent of EU citizenship.

Luisa Santos, chair of the EU-UK task force at employers’ organisation BusinessEurope, says disruption was inevitable but that no company could fully prepare for a no-deal outcome, with the potential jump in tariffs from zero to as much as 40 per cent for trade in goods.

In addition to mitigating the blow of Brexit, a deal would be a platform that would allow for the relationship to deepen over time. “It will allow for us to continue to talk,” she says. “We are not going to be able to do everything in this deal.”

Given the economic and political self-harm that a “no deal” would inflict on Britain, it is perhaps a tribute to Lord Frost’s negotiating skills — and a reflection of Mr Johnson’s unpredictable style — that the EU27 has been left guessing until the last minute about the prime minister’s real intentions.

There is genuine nervousness on both sides of the negotiating table about what happens next, although both sides still hope to reach an agreement next week.

Manfred Weber, head of the European Parliament’s large centre-right grouping, warned on Thursday that the talks were running “out of time” given the need for any agreement to be ratified by the end of the year.

Businesses around the continent are holding their breath.