Rep.-elect Cori Bush, a Democrat from Missouri, center, arrives at a new member briefing at the Capitol on Friday. With the pandemic raging, circumstances dictated the orientation for newly elected members elected bore little resemblance to previous sessions. But lawmakers will have access to coronavirus testing now. Stefani Reynolds/Bloomberg via Getty Images hide caption 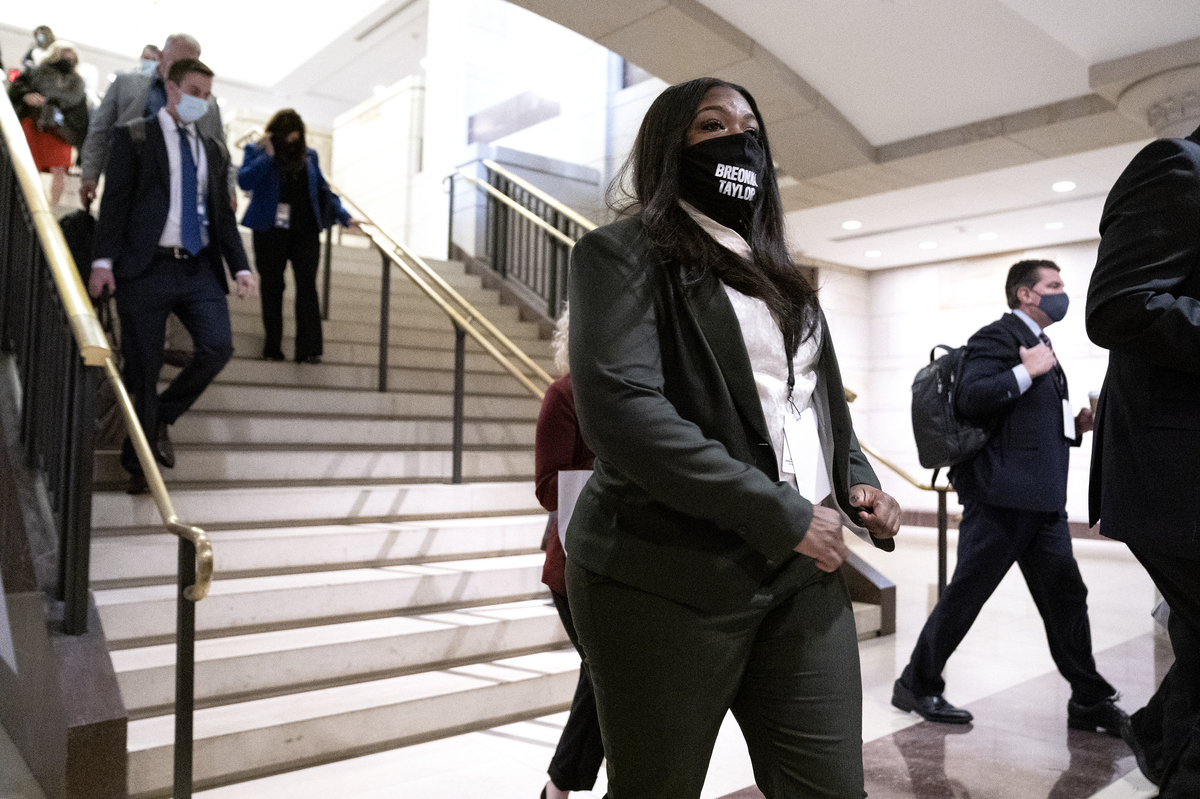 Rep.-elect Cori Bush, a Democrat from Missouri, center, arrives at a new member briefing at the Capitol on Friday. With the pandemic raging, circumstances dictated the orientation for newly elected members elected bore little resemblance to previous sessions. But lawmakers will have access to coronavirus testing now.

The House of Representatives will return Monday to a post-election session with a few major but controversial items to address, including leadership elections, how to deal with more coronavirus relief and a must-pass spending bill.

To help, they’ll have a new, widespread testing program to track the coronavirus among members, staffers and workers. The plan is a first for any chamber of Congress eight months into the pandemic, and it comes as cases are spiking across the country and in Washington, D.C.

House Speaker Nancy Pelosi, D-Calif., says the focus during the lame duck session — a notoriously difficult time to pass legislation, between the elections and a new Congress — will be on a stalled wave of coronavirus relief and funding the government before it runs out of money next month.

“Again, our focus in the Congress now, in this lame duck, continues to be on COVID relief. This is a red alert,” Pelosi told reporters on Friday. “All hands on deck.”

But that’s not all: The House holds its leadership elections this week for the new Congress that will be seated in January. Democrats retained control of the chamber, albeit with a smaller majority facing a larger Republican minority.

Pelosi will seek the speaker’s gavel again and has no challenge, while Minority Leader Kevin McCarthy, R-Calif., will look to retain his role. They’ll be among a host of members seeking other, lower down leadership posts, but both leadership teams are expected to look similar to the ones in place now.

Those elections, which are usually held in person, will look different this year. For example, Democrats will hold theirs remotely.

Meanwhile, the incoming class of newly elected members is undergoing orientation elsewhere on the Capitol complex.

House Democrats are hoping to hit the ground running when they return, but they face plenty of obstacles.

While Pelosi says job one is addressing another wave of pandemic relief, both parties still remain far apart.

Democrats are still seeking a package in the $2 trillion range for more stimulus for businesses, individuals and state and local governments.

“We’re in that same place, even more so,” Pelosi told reporters last week.

“That’s not a place I think we’re willing to go,” McConnell told a Capitol Hill pool reporter. He has been pushing for a bill that costs roughly $500 billion.

Meanwhile, both parties will be working to head off a Dec. 11 deadline when the government runs out of money. Before this month’s elections, Congress approved a short-term funding measure, and now they’ll be looking to see if they can reach a deal that bundles together all of the annual spending bills.

“I’m optimistic that that will happen,” Pelosi said recently. McConnell has also said he hopes they can reach a broad spending deal.

Finally, members will be working to see if they can reach a final deal on an annual defense bill that typically gets overwhelming bipartisan support. This year, however, President Trump has expressed opposition to a provision in both the House and Senate versions of the National Defense Authorization Act to potentially remove Confederate names and symbols from military bases and other property.

Meanwhile, newly elected members will continue orientations that began last week. Rather than Democrats picking up five to 10 new seats as expected, Republicans are celebrating gains of a handful seats or more, as roughly a dozen races remain uncalled.

“It was an unbelievable night for Republicans in Congress,” McCarthy said recently.

By Friday, about 68 member-elects and candidates in uncalled races had attended the orientation, according to the office of Illinois Republican Rep. Rodney Davis, the ranking member of the House Administration Committee who narrowly won his own reelection race. Of those, 50 are Republicans and 18 are Democrats.

“Each of us has been given the opportunity by our constituents to step up and be those leaders for our districts and for the country,” Davis said in remarks before the new members on Friday. “And it starts right now.”

The new member sessions, which are being held at the Capitol complex, will continue until Thanksgiving, and then resume after the holidays until Dec. 5.

One key concern that has plagued Congress during the pandemic is the absence of a widespread testing plan to track the coronavirus illness. Testing was only offered in limited cases.

So far, Congress has seen at least 25 of its members test positive for the coronavirus illness, and more than 150 workers.

But after pressure from members and facing increasing caseloads across the country, a new testing regime is being implemented as members return after being away for the election. Pelosi, in conjunction with Dr. Brian Monahan, the Capitol attending physician, recently announced the addition of up to 2,000 weekly COVID-19 tests for current members and staff.

It’s similar to a program pitched by McCarthy and Davis, who has called for the screening plan for several months.

Republicans “gave a plan to open up the House safely, with testing, which the speaker denied us,” McCarthy told reporters last week of the struggle to devise a plan in recent months.

This new testing plan came ahead of announcement this month by Washington, D.C., Mayor Muriel Bowser requiring testing for those who travel to the nation’s Capitol from most states. However, the new requirements don’t apply to essential workers, which members of Congress have argued applies in their case.

Pelosi shared the news with leaders of her caucus earlier this month, according to a senior Democratic aide. At Monahan’s recommendation, the House partnered up with the Air Force to provide the weekly 2,000 polymerase chain reaction, or PCR, tests for six weeks. And while the tests are a dramatic increase over previous testing levels, it still falls short of reaching the full Capitol community, which can total 20,000 workers.

Test results will be available within six to 12 hours, and those who test positive will receive additional screening to confirm the results, the aide said. A longer term plan to extend the testing beyond six weeks is also being considered.

This is as the House takes additional steps to ramp up options to allow full remote voting by members. Earlier this year, they approved a move to allow remote hearings and, under an emergency order extended through December, proxy voting.

It’s the subject of legal action by Republicans, who largely remain opposed to the plan and any expansion of it.

“We believe you just spent some millions of dollars saying you’ll be the voice for all of you in your district, you should show up and be that voice,” McCarthy told reporters recently.