Populist parties will gain in popularity and economies will remain closed unless Europe manages to get Covid-19 infections under control, according to the prime minister of the country with the lowest number of cases in the EU.

Sanna Marin, Finland’s prime minister, told the Financial Times that the public across Europe could blame governments for closing economies and hurting their wages and employment.

“This will cause protests more and more, and it’s a breeding ground for populist movements across Europe. When you’re closing an economy and people’s workplaces, it will cause political instability. Populists come with easy answers to difficult problems, but their solutions are rarely the right ones,” she added.

Ms Marin called for Europe to agree a common strategy, a significant move as Finland is the only EU country not to be hit by a strong second wave of Covid-19 this autumn. It has an average of about 40 daily cases per million people, a level that has remained stable for the past month. Austria has 20 times the number of daily cases, the Czech Republic 15 times, and Sweden 10 times.

Ms Marin said Finland’s success was down to a robust test and trace regime, half the population using its Covid-19 tracking app, and targeted restrictions, which include quarantine for all travellers from Europe.

But she said that Finland would suffer if other European countries failed to get the pandemic under control, and urged them to back a common strategy including increased testing, contact tracing, and joint rules to enable travel to restart.

“This is not a competition. We all need to be successful to be safe . . . In Finland, the situation is more stable, but still we are also more at risk if the virus spreads in other countries,” she added.

Many populist parties across Europe have lost support during the pandemic as voters have flocked to parties in power. But Ms Marin said she was worried as the general public were already tired with the situation.

Ms Marin became the world’s youngest-serving prime minister last December when she took charge of Finland at the age of 34. Her time in office has been dominated by coronavirus and her clear communication style has won plaudits, as well as increasing the polling numbers for her Social Democratic party significantly.

The centre-left party is again the largest in opinion polls but is only slightly ahead of the populist, anti-immigration Finns party.

Ms Marin said the situation could deteriorate in Finland, where she praised citizens for acting responsibly. “It could get worse very fast if we aren’t aware of the seriousness of the situation and we don’t constantly take care of our actions.”

Finland benefited from a strong focus on preparedness, including having laws already in place for dealing with pandemics and emergency stockpiles of protective equipment. It is also helped by Finns’ tendency to keep a distance from each other, as the prime minister acknowledged, as well as low population density and strong trust in authorities.

But Pekka Nuorti, professor of epidemiology at Tampere University, said its success after the summer had more to do with its basic epidemiological principles of test, isolate, trace and quarantine.

“In contrast to some other countries, our contact tracing has been very effective throughout the summer and fall,” he said, adding that authorities had been able to identify the source of infection in 80 per cent of cases in many regions, while many “secondary cases” occurred in people already in quarantine. 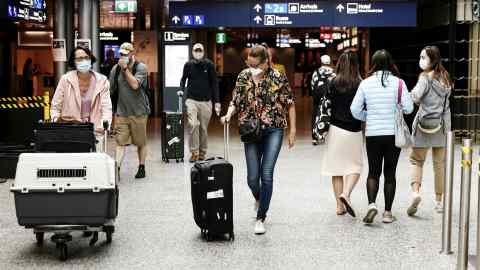 Finland’s economy has been one of the least affected by Covid-19 this year, and Ms Marin said she saw no distinction between protecting health and protecting the economy. “We need to get the virus under control. This is the main thing we need to decide: to stop the virus spreading. It’s the only way to open our economies . . . health and economy are very heavily linked.”

Finland has some of the strictest criteria in Europe for when travellers must go into quarantine, although the isolation itself is mostly self-policed. Ms Marin said the EU needed to develop a “secure system for travel” so that people could be tested both on departure and arrival, as well as common certificates for vaccinations and tests to ease cross-border journeys in the future.

“Testing is key — we need to test people more. This is the key to maintaining the situation under control. We don’t want to stop people from travelling, we want to stop the virus from spreading,” she added.

Promising news on two potential vaccines was “very good”, Ms Marin said, but she stressed that there was a “long way ahead” until a majority of people received jabs. She concluded: “The situation will get even more difficult if we don’t implement a common strategy together.”