Covid-19 has stalled the wedding industry 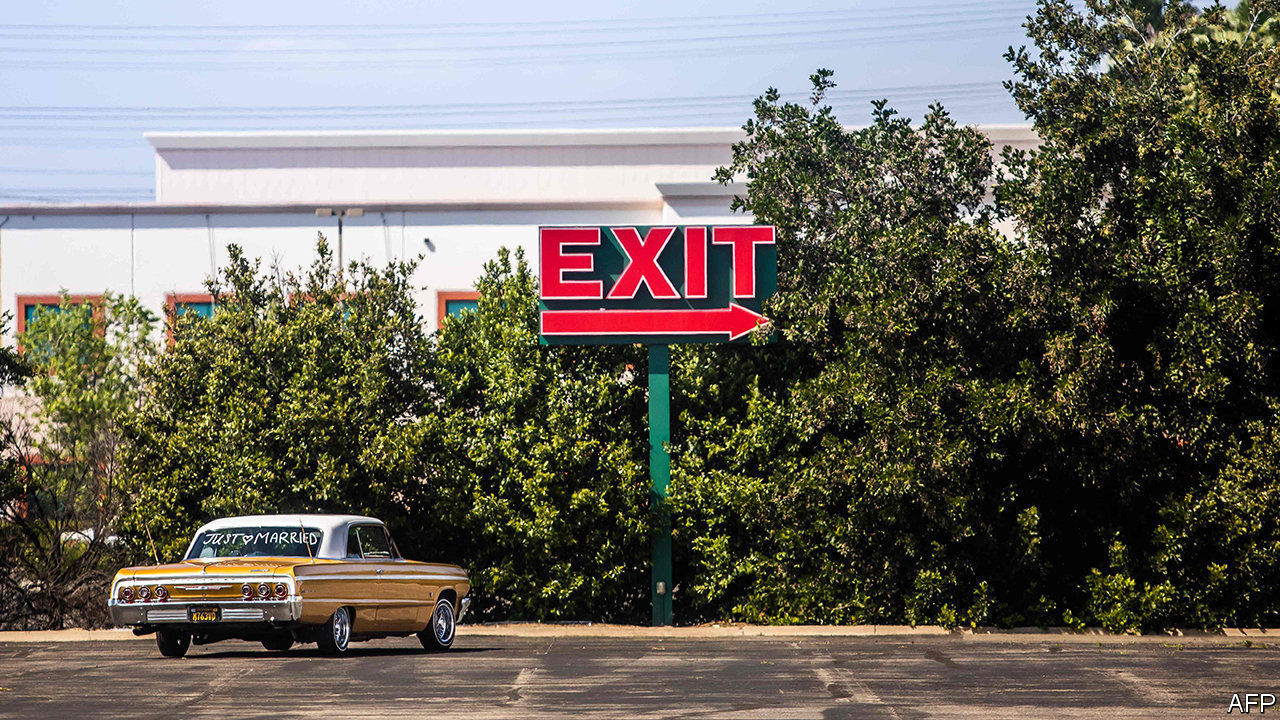 HEATHER QUINLAN and Adam McGovern, a couple from Parsipanny, New Jersey, intended to marry in October, amid family and friends. But as covid-19 outbreaks swept through America, that looked unrealistic. “We decided that, since we had no idea when the actual, traditional ceremony would take place, there was no time like the present,” says Ms Quinlan, a writer who, fittingly, has just finished a book about pandemics. Looking for alternatives, they settled on Zoom, the video-calling software that in lockdown has facilitated everything from work meetings to birthday parties. Mr McGovern contacted Parsippany’s mayor, Michael Soriano, who in turn spoke to New Jersey’s governor. He signed an executive order allowing civil marriages to happen remotely. The marriage license was then mailed back-and-forth to witnesses. The couple were married in their home on May 20th by Mr Soriano, dialling in from his office.

In normal times, weddings are big business. Worldwide, the industry is estimated to be worth $300bn a year. Each wedding feeds a constellation of businesses, from caterers and photographers to florists and entertainers. International “destination weddings”, as well as stag and hen parties, are a boon to the travel industry. Those in the wedding business often boast that it is “recession-proof”: people will always want to celebrate getting married. But it is not pandemic-proof. Couples have been forced to choose between delaying their nuptials and finding new ways to wed.

In some countries, disruption began before official restrictions were imposed. An estimated 80% of the world’s wedding gowns are made in China, and those made elsewhere are often reliant on Chinese fabrics and materials. In February, as China closed factories to try and curb coronavirus outbreaks, brides in America and Europe found themselves suddenly dress-less. By April, most nations had instituted lockdowns. Bans on people gathering put paid to conventional weddings: the average American nuptials are attended by 140 guests, according to The Knot, a wedding planning website.

For those set on a big day, the only option is to postpone. Katrina Otter, a planner of luxury weddings in Britain, says that almost all the couples on her books with spring or summer weddings have deferred them until 2021. This is hard on vendors and suppliers, many of whom are self-employed, but the most entrepreneurial have adapted: florists switch to deliveries of flowers and produce; photographers do socially-distanced family portraits; Ms Otter has been training other wedding planners.

Drought now may lead to deluge later. Ms Otter notes that demand for wedding dates next year has rocketed; many venues are already booked up from April to October. (More people may end up marrying on Sundays and weekday weddings.) In post-lockdown China, couples have rushed to wed. On May 20th, China’s own Valentine’s Day, more than 200,000 would-be-weds registered for marriage licences. In the eastern province of Anhui, registrations were up 47% from the same day last year.

Some couples won’t wait. Many of India’s 12m annual weddings are scheduled for astrologically auspicious dates. Plenty fall in the autumn but there is also a cluster in spring, especially in western India. In the state of Gujarat, a reported 30,000 weddings have already been postponed or cancelled. Those determined to keep their dates have begun getting married privately or by video. Shaadi.com, a popular online matchmaker, is running a “weddings from home” service which provides everything from a pandit (Hindu priest) to tutorials from make-up artists. Guests can join in: Anupam Mittal, Shaadi.com’s chief executive, recently participated in a ceremony with 300 online attendees, plus a livestream to thousands more. Such initiatives aid marrying couples but do little to help the informal labourers and vendors who rely on weddings for their livelihood.

Weddings have pivoted to the web elsewhere too. In April New York’s governor, Andrew Cuomo, issued an executive order, nicknamed “Project Cupid”, allowing couples to apply for marriage licences online from May 7th. (Previously, they had to turn up at the state’s marriage bureaus.) Annie Lawrence, a minister in New York City, is now conducting several Zoom weddings each week. She notes that many couples are motivated, both existentially and practically, by the pandemic. For some, being with the one they love suddenly feels more urgent; and even among romantics, the desire to share health insurance can be a factor. Project Cupid has proved so popular that no more marriage-licence appointments are available until September. Other states, including California and New Jersey, have adopted similar policies.

The speed at which “normal” weddings will resume will depend on how countries ease lockdown measures. Many European countries are beginning to relax the rules about how many people can congregate; Denmark plans to permit social gatherings of up to 500 over the next few months. Some Indian states now allow gatherings of 50 (though, in a country where guest lists can run into the thousands, this will hardly be business as usual). In America, Ohio will allow weddings and receptions of up to 300 people from June 1st, provided guests follow social-distancing guidelines. Weddings without dancing or mingling will not be quite the same.

Yet some may welcome forced simplicity. In Gaza, where the groom traditionally pays, weddings can be ruinously expensive. Thrifty men are reportedly using venue closures as an excuse for smaller, cheaper ceremonies. A Kenyan couple who wed in private, spending a fraction of their original budget, told the BBC that they have been inundated with calls from young people saying they had inspired them not to fall into debt over their weddings. Others may do well to heed their example, even when restrictions lift. One-fifth of the average Indian’s wealth is thought to go to “wedding services”, including matchmaking. In 2018 China’s ministry of civil affairs called for an end to costly weddings, which it said were incompatible with socialist values. In Latin America too, many couples go into debt to get hitched in style.

It is not clear when the global wedding industry will be up and running again. In the meantime, the act of marrying has proved itself adaptable. For her Zoom wedding, with her dress stuck in the shop for alterations, Ms Quinlan wore her mother’s bridal gown and ring. Mr McGovern borrowed his father-in-law’s class ring. During the ceremony, Mr Soriano read a familiar text from St Paul’s first letter to the Corinthians: “Love is patient, love is kind.” The passage continues: “Love…always hopes, always perseveres.”■

Editor’s note: Some of our covid-19 coverage is free for readers of The Economist Today, our daily newsletter. For more stories and our pandemic tracker, see our coronavirus hub