Lockdowns to stem the spread of coronavirus have cut CO2 emissions globally, but environmentalists warn that governments must pursue climate-friendly stimulus measures to kickstart growth or risk a post-pandemic rise in greenhouse gases.

China’s recovery has been led by the state-dominated industrial sector. Construction demand has spurred a rise in steel, aluminium and cement production of 13, 11 and 10 per cent, respectively, in October compared with the same period last year.

That puts China on course to account for nearly 60 per cent of global output in the three sectors, a rise of almost 10 per cent on last year. At the same time, exports have plummeted over the past five months, meaning the vast majority of the products being used domestically. 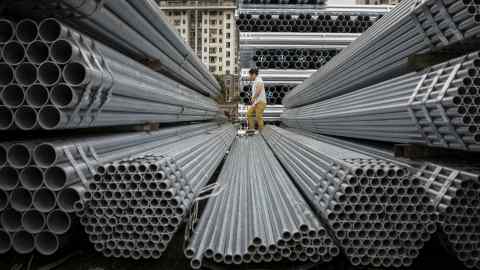 The surging domestic demand makes it near-impossible for China to phase out fossil fuels, said Yang Muyi, an analyst at Ember, a climate think-tank in the UK.

Research led by Mr Yang found that a 5.8 per cent year-on-year rise in electricity demand from May to October was “simply too fast for new wind, solar, hydro and nuclear investment to keep pace”.

As a result, China is continuing to burn coal, a primary obstacle to its climate ambitions. The country will account for 53 per cent of global coal-generated power this year; use of the fossil fuel in the rest of the world is expected to fall 12 per cent.

To prop up economic growth, China has built roads, railways, airports and industrial parks in a more limited version of the carbon-intensive playbook it used to recover from the global financial crisis.

“If we continue to rely on this model it will be very difficult to reduce emissions,” Mr Yang said. “That’s why we need the next five-year plan to change to a more sustainable level of commodity consumption.”

The renewed importance of polluting industries for growth has raised a challenge for Chinese policymakers drawing up the Communist party’s agenda-setting economic plan, which is set to be released in March.

Analysts said the document would be crucial if CO2 emissions are to peak before 2030 and reach net zero by 2060, targets Mr Xi announced in September.

Boris Kan, an analyst at Moody’s, noted, however, that coal power has lost market share to renewables this year in terms of China’s overall power generation.

“We are still seeing an increase in renewable power generation, so I think the long-term trend is not going to change,” he said.

How is coronavirus taking its toll on markets, business, and our everyday lives and workplaces? Stay briefed with our coronavirus newsletter.