Anti-lockdown protests have been hijacked by conspiracy theorists 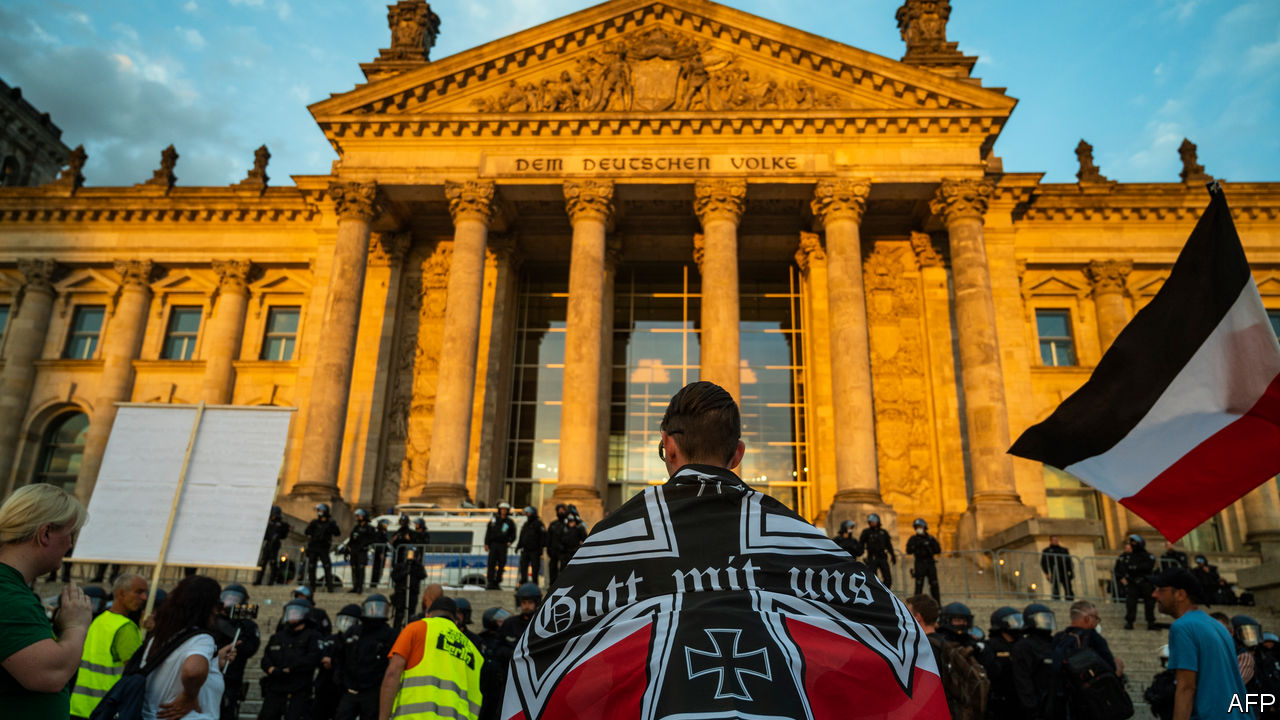 IN MANY COUNTRIES citizens have in the past few months faced restrictions on their personal freedoms unprecedented outside wartime. Many have been confined to their homes; those venturing out have found restaurants, bars, cinemas, theatres and sports stadiums closed; they have been advised and in many places obliged to wear face-coverings; and large gatherings have been frowned on or banned outright. It is not surprising that all of this has met some resistance. And as lockdown restrictions have eased, in a number of places people have taken to the streets to protest against the remaining constraints. What has been surprising is the nature and content of those protests.

Just this weekend there have been small protests in many places, including Rome, British cities including Edinburgh and Sheffield and a number of Australian cities, with the biggest in Melbourne. And a week earlier tens of thousands of Germans in Berlin staged the biggest of many demonstrations against pandemic restrictions in different German cities since April. The protesters were a diverse bunch. Some were “anti-vaxxers”, campaigners against government-mandated inoculations. Some applauded Robert Kennedy junior, nephew of the former American president, whose speech railed against 5G networks and the building of a surveillance state, and complimented Berlin as being once again on the front line against totalitarianism. Some simply objected to rules requiring them to use masks on public transport and in government buildings. But the protesters also included several hundred far-right activists, flourishing the flag of the old pre-1918 German empire (seen in these circles as a proxy for the swastika, which falls foul of laws banning the use of Nazi symbols). They even tried to storm the parliament building.

The same day, a smaller protest in Trafalgar Square in London also drew a very mixed crowd. Piers Corbyn, brother of the previous leader of the opposition Labour Party, was fined as one of the organisers of a demonstration that breached a coronavirus ban on gatherings of more than 30 people. Mr Corbyn believes the virus “is not a high-consequence infectious disease” but has been used in a “psychological operation” designed to close down the economy in the interests of mega-corporations, such as pharmaceutical and telecoms companies. The other speakers included David Icke, a former footballer and television presenter who has become one of Britain’s most prominent conspiracy theorists. His beliefs include that climate change is a hoax and that Britain’s royal family are lizards. In comparison, his views on covid-19 are more mainstream. He called the crowd in Trafalgar Square “an island of sanity in a sea of madness”, in the midst of “the illusion pandemic”.

From the outset, the pandemic has bred conspiracy theories. These fall broadly into two overlapping categories. Some see it as a “scamdemic”, ie, a hoax. In this version covid-19 either does not exist at all or is no worse than a mild bout of the flu and has been exaggerated by governments and companies in a power grab. The other sort of theory is that it is a “plandemic”, ie, real and dangerous, but a deliberate plot by some evil actors or governments, either to make huge amounts of money or to impose or extend a dictatorship.

Some of these theories have received serious scrutiny: that the virus was developed in a Chinese laboratory, for example, and then released either deliberately or by accident (or, conversely, was introduced to the country by the American army). Some have adapted older theories to new circumstances, such as the fear that 5G radio masts are killing people, or that vaccinations are a sinister government plot. Many focus on the unlikely figure of Bill Gates, Microsoft’s co-founder and a leading philanthropist. According to one poll from YouGov and Yahoo News, more than a quarter of all Americans and 44% of Republicans believe that Mr Gates wants to use a covid-19 vaccine to implant microchips under people’s skin. A talk he gave in 2015 arguing that “if anything kills over 10m people in the next few decades, it is likely to be a highly infectious virus rather than a war” has been viewed more than 30m times on YouTube, with its prescience seen by many as proof of culpability.

Perceived coronavirus-related plots have also been absorbed into the bizarre and convoluted QAnon conspiracy theory, which contends that President Donald Trump is waging a secret war against an elite of devil-worshipping paedophiles. The link with the pandemic is not obvious to outsiders (in some versions, covid-19 is a scamdemic concocted to scupper Mr Trump’s chances of re-election in November). But QAnon has spread, by one count, to 71 countries, and its symbols and adherents have turned up at protests far from their American homeland—including those in Berlin, London and Melbourne.

Uncertainty and confusion about the nature and risks of the virus make all-encompassing conspiracy theories superficially attractive. And of course they are boosted by having high-profile publicists, such as President Jair Bolsonaro of Brazil and, most notably, Mr Trump himself. He has endorsed a Republican congressional candidate with a history of promoting QAnon fantasies, and as recently as August 30th retweeted a post from a QAnon adherent claiming that the true number of covid-19 deaths in America was but a fraction of the official tally.

Even so, conspiracy theorists remain very much on the fringes, unable to mobilise mass support even against unpopular covid-19 restrictions. The most recent protests have been far fewer and smaller than those that took place around the world in early June—when much stricter lockdowns were in force in many places—to support the Black Lives Matter campaign after the death of George Floyd in Minneapolis.

But that these theories play such a prominent part in protests does bring three dangers. One is that they might be exploited by other political forces. Far-right extremists seem to have been in a minority in the crowd in Berlin, for example, but those protesting for other reasons gave them cover and a chance to recruit. Second, they feed into other “culture war” cleavages, leaving society more divided, at a time when a common threat might have brought it together. Wearing a mask should be a public-health precaution, not a political badge.

Third, they risk discrediting perfectly reasonable grievances about the response to the pandemic. In Britain, for example, Liberty, a civil-liberties watchdog, is campaigning to repeal coronavirus legislation, raising legitimate worries about enhanced police powers, data privacy, surveillance and migrants’ rights. In every country, even if it is accepted that the coronavirus is neither an evil plot nor an elaborate fiction, government responses require scrutiny and, often, protest.